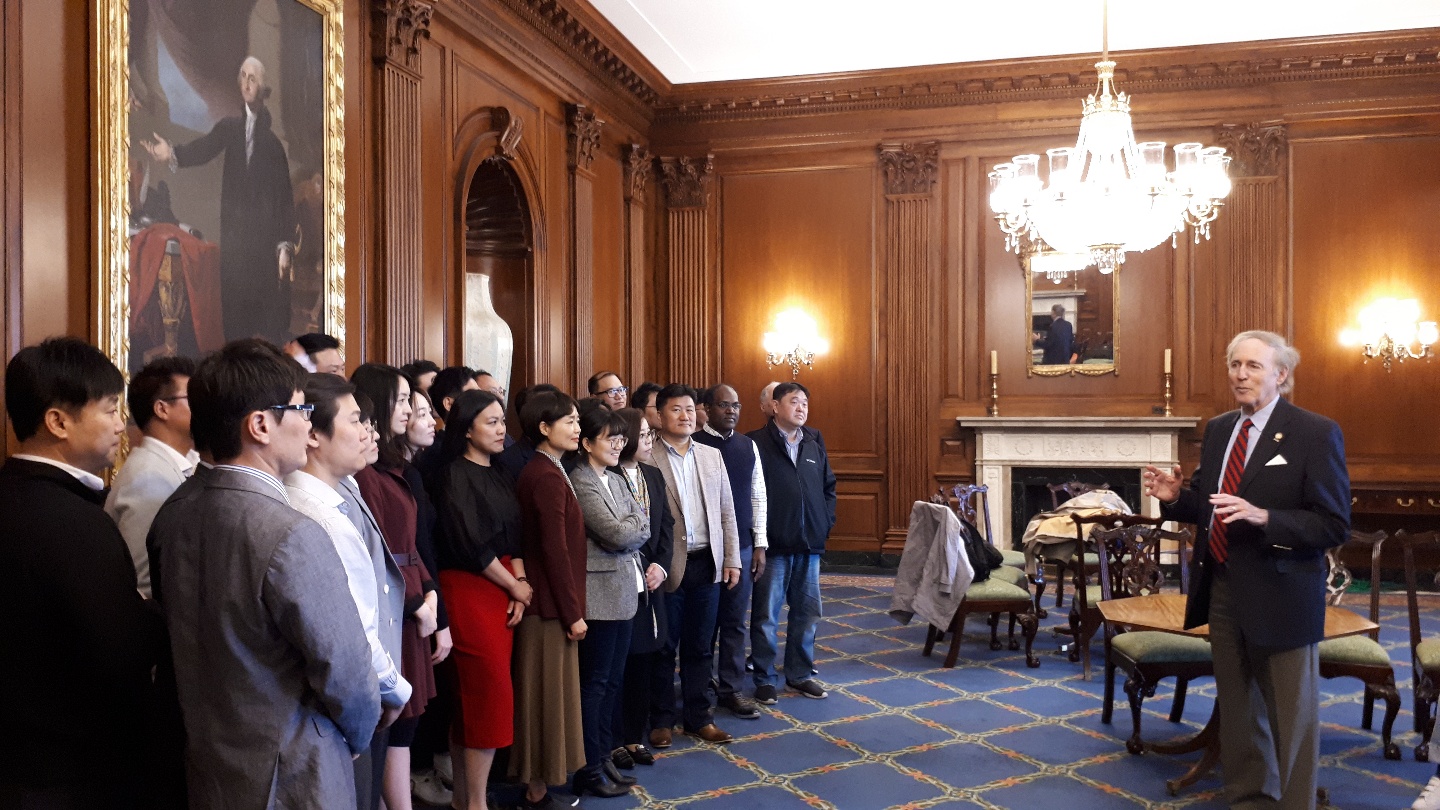 The SKK GSB Executive MBA Program operates three overseas residency programs over the course of 1.5 years. Each residency program offers students an opportunity to interact with subject matter experts or actual practitioners in various areas in the global business arena, thus expanding the knowledge and skills acquired during the Executive MBA period.  A student of the executive MBA program, Park Hyun-sung, shares his invaluable experience of the 2nd Residency Program.

The second Residency of the SKK GSB Executive program took place in Washington DC, which is the capital of the United States. What would I learn from this experience, I wondered? One sunny day in mid-April, I was filled with a sense of excitement and expectations on a plane bound for Washington Dulles Airport.

On our first trip to the IU Kelley School last August, we felt a sense of belonging as a member of the IU Kelley school and gained insights on leadership and organizational management. I waited with interest to see what else will come about this time. It only took a day after arrival for my curiosity to turn into sheer excitement.

Thanks to the grand evening reception on Sunday evening, we were able to adapt quickly to jet-lag. The Washington campus was in a downtown building and was close enough to walk from the hotel. After the introduction of the program by Professor Mike Lord, the purpose, value and the location of this residency program became clearer. I realized what a great program it was! This is something that can only be acquired from the Residency Program of SKK GSB-Kelley School.

The five-day curriculum was very intensive; some subjects were what I have never dealt with before. Fortunately, owing to my classmate who previously worked for the Korea Chamber of Commerce and Industry in the U.S., I was able to get a glimpse of trade-related information before our departure. Most of the curriculum consisted of a variety of topics that MBA students must know: Global Trade Policy and Negotiations, The political economy and its global implications (US, China, South/North Korea, and others), The role of Associations (The U.S. Chamber of Commerce, AMCHAM, The World Bank), The legislation procedure of the U.S. and the role of Congress in the public policy process, and so on.

Personally, the topics that intrigued me the most were about the Affairs of Northeast Asia, the trade war of U.S.-China, and the possible stance of Korea in these relations. Each speaker had a distinctive view and shared opinions accordingly on what Korea should uphold. What was dealt in depth – the inevitability of restoring future-oriented relations for Korea’s successful international relations – left a deep impression on me.

In my current work, since I lack expertise in the field of international politics, government relations and legislation, it is commonplace to formulate strategies based on the task itself – such as patents, tariffs and customs clearance. But through this residency, I learnt to think with a holistic frame of mind. This might be helpful in the future should I get to exchange views on mid and long-term business strategies with the company's decision makers. If I hadn't chosen the SKK GSB-Kelley EMBA program, I would not have even dreamt of such an opportunity.

Washington, D.C., the capital of the United States, is not only the center of the U.S. legislature, administration, and judiciary, but also home of the White House and federal agencies in the United States. Washington D.C. can be said to be the world's capital as well, where embassies from more than 170 countries around the world reside. The headquarters of several institutions are also based in Washington: the IMF, World Bank, the Korea International Trade Association, the lobbying groups for the world of politics and economics and the functional groups.

Closing Remarks
It would be impossible to get a full grasp of everything I learnt in just a few days: the international situation, the impact of international relations on trade-economy, future prospects, Government Relations and Public Affairs, lobbying and so on. However, if it had not been for the Residency Program, it would have been impossible to get to the heart of these complex contents. I think the Residency program at Washington, D.C. was a masterpiece which consisted of a well-rounded curriculum, subject experts on varied and difficult topics, and last, but not least, the efforts of the MBA school managers who organized this.

I genuinely hope that the SKK GSB-Kelly School EMBA Program continues to provide Residency Programs to students to broaden their insights and to gain knowledge that would prepare them to become future global leaders. I'm now back in business and swamped with work, but the impressions from the Residency still vividly linger in me.