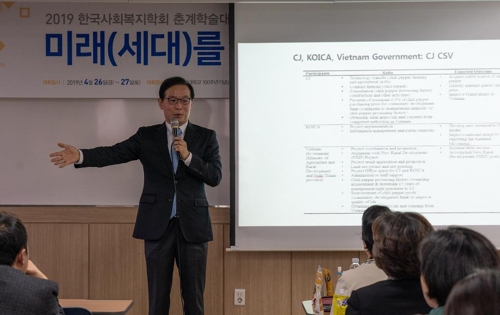 More than 100 officials from domestic and international social welfare agencies attended the event at Seoul Theological University. For two days, they exchanged their opinions on the event's theme of "Corporate Social Contribution for Future Generations."

Prof. Tai-young Kim of SKK GSB, introduced CJ Cheiljedang's "Creating Social Value (CSV) Project for Rural Development in Vietnam" as a case study. CJ Cheiljedang has worked with the Korea International Cooperation Agency (KOICA) since 2014 on a project aimed at increasing income levels in Vietnam and strengthening the country's self-sufficiency.

Professor Kim said "CJ Cheiljedang contributed to improving the income of farming households by spreading advanced agricultural technology, as well as pepper seeds, in poorer areas of Vietnam." He went on to explain that it was the farmers themselves, not the short-term increase in income, that allowed them to succeed. The farmers' self-confidence and "we can do it" attitude reflected the strategy, which is consistent with the sustainable development of talent and communities. Professor Kim added, "In particular, it distinguishes itself from Nestlé, which promoted CSV based on performance by selecting areas where the value chain of companies already exists."